On the night of September 19, 1910, railroad clerk Clarence Hiller was asleep with his wife and their two children in their home on Chicago’s south side.

A little after two in the morning, Hiller’s wife, Eva, was woken by a disturbance in their daughter’s bedroom. She alerted her husband, who went to investigate and encountered an intruder in the pitch-black hallway. A struggle ensued between Hiller and the intruder. Eva could see nothing in the darkness, but heard their bodies scuffling and tumbling down the stairs. From upstairs, Eva heard a gunshot. Then two more. The intruder dashed out the door and into the night.

Thirteen minutes later, police officers a few blocks away from the Hiller home chanced upon a man walking down the street. The man had blood on his clothing and nursed a wounded hand. Police stopped to question the man, who gave his name as William Jones. The man claimed that he injured his hand falling off a streetcar and was on his way home. Officers frisked the man and found a revolver that had recently been fired, three empty cartridges still in the cylinder. They arrested the man and took him to the police station. Police soon received word of the Hiller shooting.

Hiller was found sprawled in a puddle of blood at the bottom of the stairs, his head toward the door. One bullet entered Hiller’s left arm, traversed his shoulder, and exited the right side of his neck. Another bullet entered the left side of his chest, penetrated his heart, and exited through his back. Either wound alone was lethal. A third bullet apparently grazed the perpetrator’s hand, but did not strike Hiller. Two spent cartridges recovered by police at the scene were the same caliber and brand as the bullets in the suspect’s gun.

Police learned that the man in their custody was Thomas Jennings, recently released on parole from a stretch in the Joliet prison for burglary. Connecting Jennings to the crime presented difficulties for police. Eva Hiller never clearly saw her husband’s assailant. She was unable to identify the suspect in a line-up. Jennings denied responsibility for the killing, refusing to confess even under intense third-degree interrogation.

All of the evidence casting suspicion on Jennings — his history of burglary, a questionable hand injury, proximity to the crime, a recently fired revolver, similar bullets — was circumstantial. No direct evidence placed Jennings at the crime scene.

The morning of Heller’s death, Captain Michael E. Evans, chief of the Chicago police Bureau of Identification, visited the crime scene looking for fingerprints. He found the impression of three fingerprints on a recently painted wood railing outside the kitchen door of the Heller residence. The wood was sawed off and taken by police. Evans matched the unknown fingerprints with the index, middle, and ring finger of Jennings’ left hand.

Jennings was charged with murder, facing a sentence that included execution. His trial was the first time fingerprints were introduced as evidence in a capital case in the United States. Jennings’ defense lawyer challenged the scientific validity of fingerprint identification, but trial judge Marcus Kavanaugh was willing to consider the testimony of experts as evidence.

“If the theory of the prosecution is right,” Kavanaugh said, “the slayer of Hiller…wrote his signature on the house as he entered.”

Four fingerprint experts presented testimony to the jury. Aside from Evans and his son, William Evans, who was also an examiner in the Bureau of Identification, the witnesses included Edward Foster, chief of the police identification bureau in Ottawa, and Mary E. Holland.  One of the first women fingerprint examiners in the U.S., Holland previously set up fingerprint bureaus for the Washington, DC, Police Department and the U.S. War Department.

Based largely on the fingerprint identification, Jennings was convicted of Heller’s murder and sentenced to death.

Jennings appealed his conviction to the Supreme Court of Illinois, arguing that the fingerprint testimony should be inadmissible because it is unproven and violated his 5th Amendment right not to incriminate himself. The Supreme Court disagreed.

“…[T]here is a scientific basis for the system of finger-print identification and that the courts are justified in admitting this class of evidence; that this method of identification is in such general and common use that the courts cannot refuse to take judicial cognizance of it,” the court said in denying the appeal.

In terms of violating the right not to self-incriminate, that argument was also a non-starter. “If inferences as to the identity of a person based on the voice, the appearance or age are admissible, why does not this record justify the admission of this finger print testimony under common law rules of evidence,” the court wrote. 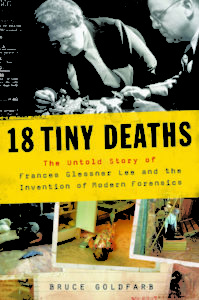